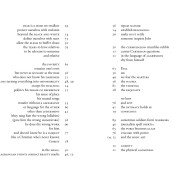 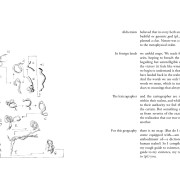 Usually we open a dictionary looking for an answer. Svetlana Lilova’s Metaphysical Dictionary is different: you’re more likely to come away with a question. It’s a collection of very short poems, framed as term and definition, alphabetically sorted. The individual entries may fascinate or frustrate, amuse or confuse. But as you read through the entirety, or skip from page to page, the terms echo and reverberate, and sometimes fold together into transient origami.

An enigmatic, whimsical, piercing and utterly unique book, illustrated by Graham Falk, whose drawings and cartoons reflect the tonal variety of Lilova’s poems.

Svetlana Lilova’s Metaphysical Dictionary is a compendium of oblique definitions; a taxonomy of gists.

Psychological and emotional in content, yet pared down to the bare minimum and presented with complete lexical discipline, the Metaphysical Dictionary shows us an author grappling to explain the world to herself. Maybe this is something you do too – in fragments of thought in a journal, or in a sketchbook of brief impressions.

As poems, these are reductions, or Pound’s gists and piths in extremis. They are beyond spare: all payload, no bulkhead. Sometimes an entry is simply the germ from which another poet might have grown a conventional poem. For example, witness:

The real reward comes as the definitions accumulate. They fold back on themselves; elusive shapes crystallize and dissolve like transient origami.

Psychologically acute, suffused with feeling, with a personal narrative slipping between the lines, this book invites total immersion in the private language of its creator, and conveys (us to) the heart of a playful, enigmatic, whimsical, sometimes pained but always hopeful interior.

This sly, whimsical debut collection by Toronto poet Svetlana Lilova is not much more than pocket-sized, but its poetic reach is expansive. Lilova was born in Sofia, Bulgaria, and arrived in Canada without knowing any English, so having a dictionary on hand was essential. Metaphysical Dictionary is an idiosyncratic version of that survival tool. (It’s idiosyncratic even in form: the alphabetical entries are from A to Y.) In an interview with the literary magazine Canthius, Lilova explained that she chose terms that “possess personal emotional valence and associations.” At their best, these epigrammatic gems resonate profoundly. Throughout, there’s the sense of the poet trying to drill down to the essence of feelings and motives. Anger, for instance, is defined as “a scab/some of us sometimes peel/off the raw hurt.” Elsewhere, Lilova captures the paradoxical truth of “emptiness” as “the heaviest of feelings” and “stories” as “multipliers of our experience.”
Barb Carey at Toronto Star

Metaphysical Dictionary by Svetlana Lilova is profound, whimsical and wise, delightfully illustrated by Graham Falk. At her recent book launch at Centennial College, the author described how, newly-arrived in Canada and never having heard spoken English, she traversed the city with a dictionary in hand. Fast-forward many years, and Lilova offers us a compass, a roadmap, a mirror and a prism through which we can distill our lived experience and inner selves in this small, elegant volume.
Educateria Gift Guide

Svetlana Lilova was born in Sofia, Bulgaria, and was raised by her grandparents in a remote rural village. In her early teens, without warning, she was spirited through the Iron Curtain by relatives. She arrived in Canada not knowing a word of English. Soon she was inseparable from her dictionary.

Be the first to review “Metaphysical Dictionary” Cancel reply