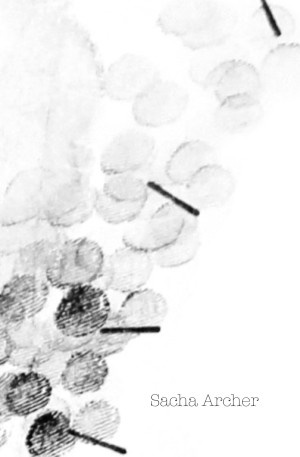 Tsk, a click of the tongue, paired with oomph, is far more related to music than semantic communication.

a narrative of stylistic evolution that evolves from angular, architectural structures to compositions with organisms as the main visual idea.

If there is a narrative that emerged via the subconscious, it might be a birth.

TSK oomph is a visual poetry collection that builds a narrative of stylistic evolution that evolves from angular, architectural structures to compositions with organisms as the main visual idea.

Sacha Archer is a Canadian writer, visual artist and ESL Instructor currently residing in Ontario. He was the recipient of the 2008 P.K. Page Irwin Prize for his poetry and visual art, and in 2010 he was chosen to participate in the Elise Partridge Mentor Program. His work has appeared in journals such as filling Station, ACTA Victoriana, h&, illiterature, NoD, and Experiment-O. His most recent chapbooks are Detour (Spacecraft Press, 2017), The Insistence of Momentum (The Blasted Tree, 2017), and Acceleration of the Arbitrary (Grey Borders, 2017).

One of his online manifestations is his blog at sachaarcher.wordpress.com.

Be the first to review “TSK oomph” Cancel reply